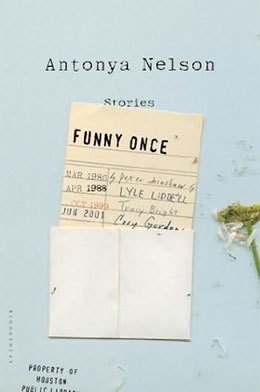 FUNNY ONCE
by Antonya Nelson

Mavis Gallant once said, famously, that a Canadian “is someone who has a logical reason to think he is one.” You could say much the same thing about family in Antonya Nelson’s new collection of stories. By the time we encounter them, most have been blown apart and reassembled in functional but unorthodox ways, as a child might do with Mr. Potato Head figure. Often, this has little to do with blood.

As a result, many of the relationships require prefixes. “First Husband,” is about Bernadette and Lovey, Bernadette’s ex-stepmother-in-law. “Ex. Former. Step. As if there was some remove in the relationship. As if there ever had been,” thinks Lovey after Bernadette calls her in the middle of the night to drop her kids off on the pretense of needing to fish her husband out of a bar (her actual plan is to join him).

The divorced mother in “The There There,” meanwhile, finds herself allied by default with his ex-girlfriend from down the street, a girl whose bottom she wiped when she was little. The narrator of “iff” lives with her ex-husband’s alcoholic stepmother, Gloria, who moved in after a failed suicide attempt, and her teenaged son Liam. (Nelson’s women often endure two rounds of abandonment: first by their husbands, then later by their children.)

Nelson can render a personality as quickly and efficiently as a boardwalk sketch artist. An ex-boyfriend’s physical therapist-wife is described as “an upbeat, wide-faced young woman, a leader of cheers” while a dour pair of twins are as “unadorned as drones, heads capped with hair the exact color and function of rodent fur.” She’s equally adept at capturing a mien: “He felt comfortable dwelling not in the past, exactly, but in a familiar place that happened to be the past.”

Infidelity, which functions in much the same, reality-denying way as drinking or drugs in these characters’ lives, continues to play a prominent role in Nelson’s work. “The Village” begins with Darcy stumbling upon the news that her deceased father’s one-time mistress, Lois, has died. Her father had voluntarily confessed the affair to mitigate Darcy’s pain after she totaled the family car when she was a teenager, then arranged for her to perform community service at the soup kitchen Lois ran. Lois’ role in Darcy’s life had been pivotal, life-changing. When Darcy goes to Orlando for the funeral, however, she is nonplussed to discover that Lois’ adult children don’t hold their mother in the same high esteem, dismissing her instead as an “exasperating dingbat.”

Though they tend to look messy on the surface, these tales (most of which are set around Nelson’s usual haunts of Wichita, Houston and Albuquerque) always have a fine emotional balance, one Nelson achieves through elaborate systems of narrative weights and counterweights. That’s certainly true of the novella that anchors the collection, “Three Wishes,” which unites many of its preoccupations (infidelity, aging, alcoholism) via the story of three siblings who have just put their father in a home.

The most powerful character here is the one who’s absent: the fourth sibling, Hamish, who died years ago, at 19, in a drowning accident. He’s there in the chaos of the father’s senility, in the surviving brother’s reckless affair and committed drinking. And he’s there too, physically, in the face of his young nephew, Nigel. When the latter’s long-absent father suddenly turns up, however, Nelson once again jerks the pulley: what Nigel’s dad sees reflected back at him is the image of his own dead brother.

Suspension of disbelief is rarely an issue with Nelson, whose writing, if anything, suffers from a surfeit of reality. These are not tales one reads to “escape.” So why should you read them? Not—to paraphrase that old joke about the headbanger—because it feels so good when you stop, but to experience Nelson’s intelligent observances, her alchemic ability to turn base metals into precious ones. And perhaps, yes, because they’ll make you feel just that much better about your own life.

Comments: Comments Off on FUNNY ONCE
by Antonya Nelson Posted by: admin Categories: Adult Fiction, Reviews Tags: Fiction, short stories, Toronto Star
← JULIET WAS A SURPRISE
by Bill Gaston
THE ZHIVAGO AFFAIR: THE KREMLIN, THE CIA AND THE BATTLE OVER A FORBIDDEN BOOK
by Peter Finn and Petra Couvée →