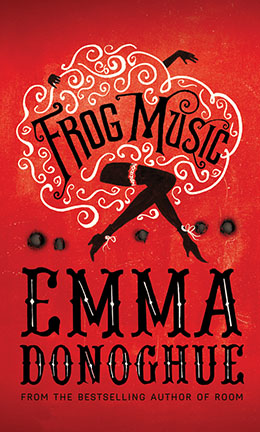 Those who know her only for her breakout novel Room will assume that Emma Donoghue’s new novel about the unsolved 1876 murder of a cross-dressing female frog catcher represents a thematic departure. But it’s actually the reverse: half of Donoghue’s six pre-Room novels were set before the 20th century. (That many were coming-of-age or love stories featuring gay characters ghettoized Donoghue for a time as a Lesbian Writer.)

Donoghue has gathered the known facts about the now-obscure shooting death of 27-year-old Jenny Bonnet in a shabby saloon on the outskirts of San Francisco and, with the help of some fictional shading, proposed one possible solution.

The bullets that flew threw the saloon’s window that day narrowly missed Jenny’s friend, a burlesque dancer (and occasional prostitute for high-end clients) named Blanche Beunon. In Donoghue’s telling, Blanche believes her boyfriend Arthur and his friend Ernest are behind the incident and further, that she herself was their real target. Driving Blanche’s notions, and the book’s narrative, is the series of events put into play after the two women met a month previously, when Jenny knocked Blanche over in the street with her bicycle.

Over amends-making drinks, Blanche had found herself wooed but Jenny’s devil-may-care attitude and outlaw-ish tendencies. Despite having been tossed into jail more than once for her predilection for wearing trousers, Jenny, who made her living combing the local swamps for the frogs whose wildly popular meat was in high demand at local restaurants, boldly persisted with her sartorial choices.

Blanche, we learn, came to San Francisco the year before from Paris, where she and Arthur had been circus performers until a trapeze accident put an end to Arthur’s career. Arthur now spends his days gambling away the proceeds of Blanche’s earnings at the House of Mirrors with his faithful friend and ex-trapeze partner, Ernest. Despite this imbalance, Blanche loves Arthur and the freedom that comes with being the couple’s breadwinner.

When Blanche reveals to Jenny that she has a one-year-old son though, Jenny’s sharp questioning pricks Blanche’s sense of propriety and then, her conscience: it’s obvious to Jenny that “P’tit” is not, as Jenny’s Madam at the House of Mirrors had assured her, at a well-run daycare but at one of the city’s notoriously squalid baby farms. Blanche decides to rescue her sickly, affectless son, inciting Arthur’s disapproval—keeping P’tit means she can no longer be relied on as a steady source of cash.

In the novel’s early parts, Donoghue’s tendency to work historical facts into Blanche’s thoughts and the novel’s dialogue can result in some cringingly leaden exchanges: “The city’s always growing like blazes, doubling every decade” Jenny tells Blanche as if she were cribbing from an annual report. And a third-person narration that zooms from a bird’s eye view to a convenient spot inside Blanche’s head sometimes feels like Donoghue wants to have her cake and eat it too.

Once the scene’s been set though, Frog Music builds some admirable momentum in its middle parts, especially when the power dynamic between Blanche and Ernest fatally shifts after Arthur falls victim to the smallpox epidemic sweeping the city. But Donoghue’s most subtly impressive achievement is to get us to root for a female hero who, by conventional standards, is an anti-hero: one whose instincts for sex and business trump her maternal ones, whose love for her child boils down to an act of will.