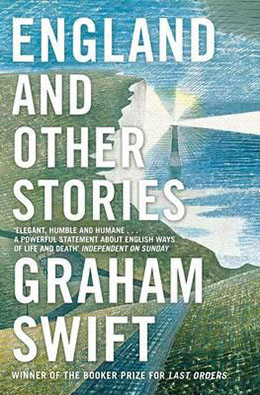 ENGLAND AND OTHER STORIES
by Graham Swift

It’s been a recent trend in filmmaking to withhold the picture’s title until the very end, as if the audience had been entirely in the dark about what it was watching until the credits rolled. The title story of England and Other Stories, Graham Swift’s first book of short stories in 30 years (all of them previously unpublished), functions similarly—but less coyly. It is the collection’s caboose, but also its coxswain.

Which is to say that the twenty-five tales it contains, many of them mere wisps of things, are intended as a kind of collective human snapshot of the author’s native land. That said, their contents should strike a chord, thanks to globalization, with anyone who’s lived in a Western country in recent decades.

“England” begins with Kenny Black, an Exmoor coastguard, coming across a car stuck in a ditch while on his way to work in the early morning hours. As he goes to lend the driver a hand, he’s surprised to discover the latter is black, Exmoor being “not a place, an area, for black faces.” His perplexity is soon alleviated: Johnny Dewhurst, it turns out, is a touring comedian from Yorkshire. After an amiable chat over coffee, the two men go their separate ways, though the encounter leaves Kenny in a ruminative mood. The subject of those ruminations isn’t—as one might assume—race, but courage: though Kenny’s job ostensibly requires it, he knows that what Johnny Dewhurst does is “unfathomably” more so.

Many of the stories pivot around a single concept like this, Swift playing an idea’s modern interpretation off against its traditional one. “Going up in the World,” about a man who worked as a builder of London’s high-rises before washing their windows, for example, contrasts the physical danger of this work against the invisible danger his partner’s son faces when he gets a financial job inside one building’s gleaming offices.

In one the best stories, “Ajax,” a classics professor recalls how a casual comment about scouring powder made by the “weirdo” neighbour of his youth (who performed calisthenics in the backyard in his underpants) started the chain of events that led to his career as a professor of Greek. It was an outcome that would have pleased his suburban, education-obsessed parents. The education that proved more challenging, however, was his coming out as a gay man, something he retroactively suspects his neighbour was, too.

Swift occasionally gets over zealous with this approach. “Wonders Will Never Cease,” about a middle-aged man who “chased” girls in his youth and now literally chases his competitive-runner girlfriend, never rises above the level of an elaborate pun. “Holly and Polly,” about a lesbian couple who met while working at sperm bank, strives for an irony that isn’t necessarily there.

Some of the most successful stories are scaffolded on the notion of the frozen moment. In “Lawrence of Arabia,” a public loss eclipses a private one—but also renders the day indelible—when a woman’s husband, an unknown parks keeper, dies on the same day as Peter O’Toole. In the affecting “Fusilli,” a man finds that the pasta aisle of the grocery store, where he had his last phone conversation with his son before he was killed in Afghanistan, has taken on an unbearable taint.

And in the echoing, story-within-a-story “St. Peter,” a man recounts how, when he was a boy, a private lecture from his vicar father about St. Peter’s betrayal of Jesus took on a special resonance when his father died several months later. Whether his mother and stepfather, a local schoolteacher also named Peter, had betrayed his father before his death, however, the narrator can’t be sure.

Though entertaining in their own right, these tales also lay bare, in their brevity and economy, the mechanics of Swift’s approach to storytelling—something that’s arguably harder to see in his nine novels, which include the Booker-Prize-winning Last Orders and Waterland. And while not every one bears the imprimatur of genius, the strongest few more than justify the price of admission.