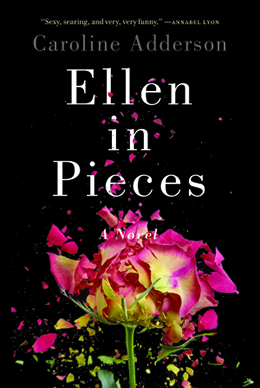 ELLEN IN PIECES
by Caroline Adderson

In her fourth novel, Ellen in Pieces, Caroline Adderson gives us a midlife portrait of Ellen McGinty, a divorced former publicist who sells the Vancouver home where she raised her two daughters to bankroll a second career as an artist. The move brings with it an unexpected pleasure when Ellen finds herself in the arms of Matt, “a sweet, rutting lad” twenty years her junior.

Ellen’s roguish appeal is enhanced by her tendency to sleep with people and regret it later, though it’s possible that Adderson intended to write a fiercer character than the one we get. Anger, we’re told early on, is Ellen’s “default emotion,” yet there’s scant outward evidence of this—even less so as we go along.

Much of Adderson’s own allure as a writer lies in her ability to coax the funny and the mundane into coexistence with larger, less hilarious events (the Holocaust, spinal cord injuries); here, the latter comes later in the game, when Ellen is diagnosed with stage four breast cancer.

Told from Ellen’s perspective in close third-person, the novel’s first four chapters offer select episodes from a seven-year period in her forties. In one, Ellen’s youngest daughter Yolanda gets pregnant and Ellen, determined not to be the one raising the child, goes on a mission to coral the oblivious father. In another, a hiking holiday in France marred by tetchiness with her friend Celine turns minor bedroom face when the women discover they’ve been competing for the affections of the same man.

The novel’s strongest chapter has Ellen’s father Jack announcing he’s coming to stay with her after a 25-year estrangement: the two haven’t seen each other since a heavily pregnant Ellen ruined his fiftieth birthday party by having sex with her sister Moira’s husband. The weeks-long father/daughter reunion moves seamlessly from cathartic—Ellen realizing she still craves her father’s approval and, remarkably, that he bears no grudge—to tragic when, on his way to the airport, Jack takes a detour to the ocean and commits suicide.

Anecdotally omnipresent throughout the novel is Ellen’s ex-husband Larry, a failed playwright and incurable Casanova who left her twice, including when she was pregnant with Yolanda. The two still fall into bed together occasionally, including after Larry takes up with Yolanda’s best friend (whom Ellen refers to hilariously and often as his “child bride”). During their brief marriage, Ellen and Larry had lived off the grid on one of B.C’s hippie islands—a bonus as it gives Adderson ample opportunity to skewer West Coast flakery: “If you met somebody on the road on Cordova Island, you stopped and talked for half an hour about your garlic crop and your aura.”

Several of these early chapters, which offer some of Adderson’s funniest, sexiest writing to date, were first published in magazines as stand-alone stories, which accounts for their conspicuous, shiny completeness; a quality that turns out to be something of a mixed blessing.

A third of the way into the novel, the perspective suddenly shifts. We’re now with Matt—the unemployed ESL instructor Ellen has an affair with after moving into her pottery studio—as he endures an awkward Christmas trying to bridge the social gap between his linguistics doctoral student girlfriend and his scrappy Edmonton family. Two chapters later we’re immersed in Ellen’s troubled daughter Mimi’s struggles in Toronto. We return to Ellen’s perspective just twice more before the burden of the narrative shifts, post-diagnosis, entirely to other characters: Larry, Ellen’s friend Georgia, her grandson Eli. It’s hard not to feel, like Matt whom she turns away at the door without sharing the bad news, a bit shut out; in short, we miss her.

Perspective shifts are often used to reveal something a protagonist can’t, or won’t, but these feel more like tangents: Adderson is hoping we’ll be as curious about her secondary characters’ lives as we are about Ellen’s. Instead, it feels like we’ve strayed from the place we’re supposed to be. Its dustjacket calls Ellen in Pieces “genre-bending,” but what Adderson is doing seems a little more practical than that. Though individually its parts more than hold their own, as a whole the novel feels cobbled together—like a manor spackled and painted to hide a series of additions—so that at a certain point its title starts to take on an inadvertently literal cast.

A caveat to this is the novel’s genuinely moving ending, which hinges on a chance meeting between Mimi and Matt. Imminent mortality has a way of forcing those facing it to get down to essentials, and what finally comes to light in this chattily engaging but structurally problematic novel is that its genre isn’t all that bent after all: it’s a love story.

Comments: Comments Off on ELLEN IN PIECES
by Caroline Adderson Posted by: admin Categories: Adult Fiction, Reviews Tags: Fiction, Globe and Mail
← HOW TO BE BOTH
by Ali Smith
TELL
by Frances Itani →