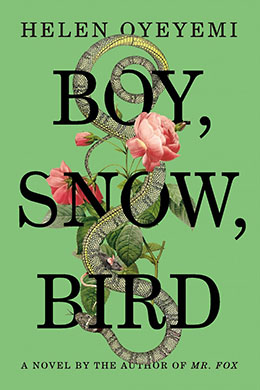 She’s not quite 30, yet British-Nigerian writer Helen Oyeyemi has already produced five uncommonly subtle, intelligent novels. Several tread in the realm of the mythic. Mr. Fox riffed on the story of Bluebeard; The Opposite House on the syncretic Afro-Cuban religion of Santería

Her latest, Boy, Snow, Bird, uses fairytales to illuminate the rather un-fairytale-ish subject of race in pre-civil rights America, though calling it—as the jacket does—a retelling of Snow White is slightly misleading. Oyeyemi has consistently shown that she’s not one for easy equivalences, so while the novel’s inventory includes mirrors, a stepmother, and a girl named Snow, it’s more like an amalgam or—this being America—a melting pot of fairytale tropes. The house where Snow lives, for example, with its thick brambles and perpetual smell of baking is described as one “you could start fanciful rumours about: ‘Well, a princess has been asleep there for hundreds of years…’”

What transpires in the novel is, at any rate, beguilingly strange enough that it mostly manages to hover just above demands for verisimilitude.

The book’s breathtakingly good first section is narrated by Boy, who happens to be a white-blonde girl from Manhattan. After enduring twenty years with her cruel, sadistic father the Rat Catcher—her mother’s fate having never been explained to her—Boy takes the first bus she can find and ends up in Flax Hill, Massachusetts: “a town of specialists and I hadn’t brought any skills with me.” It’s 1953, yet Flax Hill’s European-style ateliers produce, among other things, hall-length tapestries woven from hand-dyed thread.

Boy ends up at a boardinghouse (“I needed a landlady. Any landlady”) with a group of other young women and eventually finds work in a bookstore run by the imperious Mrs. Fletcher, who plays accommodating host to a group of black kids who skip school everyday to read her unbought books.

Despite some antagonistic initial dates with a widowed history professor-turned-metalworker named Arturo Whitman, Boy ends up marrying him, though secretly she wonders who captivates her more, Arturo or his extraordinary-looking daughter. Snow is “poised and sympathetic, like a girl who’d just come from the future but didn’t want to brag about it.”

It’s the birth of Arturo and Boy’s daughter, Bird, however, that startlingly exposes the truth about the Whitmans: that they’re black “passing” for white. The revelation explains why dark-haired, pale-lipped Snow is treated with such reverence by her grandparents and also why Arturo’s sister, Clara, was sent away years ago to live with relatives in Mississippi.

Unwilling to expose Bird to inevitable, withering comparisons with her half-sister, Boy reverses tack by sending Snow away to join her black relatives. But despite their engineered separation, the sisters eventually find their way to each other. Oyeyemi picks up here on the doubleness that’s been a theme in her previous novels as the girls discover that, despite their physical differences, they share some unusual characteristics. They don’t appear in mirrors except when they’re together, for example.

I was rooting hard for this book, but it’s hard to ignore the loss of momentum when 13-year-old Bird takes over the narrative in the second part. And though we do return later to Boy’s perspective, the origin story that Oyeyemi uses to wrap things up fatally crosses the Rubicon from the fantastical to the semi-realistic and, along the way, opens the door to the plausibility police.

It’s equally apparent that Oyeyemi is hugely talented, as fearless as she is funny. The finest parts of this book are still better than an entire shelf of average ones. As the Rat Catcher says at one point: “There is no exquisite beauty without strangeness in the proportion.”