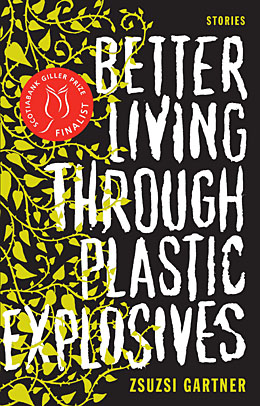 Swift famously described satire as: “a sort of glass wherein beholders do generally discover everybody’s face but their own.” Zsuzsi Gartner has been touted as a satirical writer, and to the degree that her latest collection of short stories—a follow-up to 1999’s All the Anxious Girls on Earth—heaps scorn on a wide range of targets, the definition fits. Schadenfreude, self-righteousness, wanton materialism, hypocrisy: Gartner’s characters’ vices are many. The problem is that these characters are so extreme, their narratives so consistently and deeply unreliable, that most readers will be hard pressed to see anyone—let alone themselves—in them.

Four of Gartner’s stories are set on a “quiet cul-de-sac” and told from an omniscient third-person plural perspective. In Summer of the Flesh Eater, this “we” is a group of husbands coping with the arrival of an unabashed redneck into their midst. The din of latter’s backfiring Harley turns out to be the least of their worries, however; one by one the men’s wives fall prey to the interloper’s animal magnetism—their truffle oil risottos rejected in favour of the aphrodisiacal effect of greasy barbequed meat. What we get is the physics of two clichés— boorish, beer-swilling hick meets unbearably pretentious yuppies—cancelling each other out.

Another of the cul-de-sac “we” stories makes the transition from the grotesque to the outright offensive. In The Adopted Chinese Daughters’ Rebellion, a group of teenaged Chinese girls adopted into white families grow up to reject their parents’ well-meaning attempts to inculcate their birth culture into them. These efforts include footbinding (being liberal-minded families, the practice is undertaken by the fathers), teaching the girls “patriotic marching songs praising Mao Tse-tung,” and how to “release a frothy gob curbside [as their] ancestors had done for thousands of years.” But when Susanna, the only non-Chinese girl on the block (and a violation of its “one-child policy”), tries to be like her sister, she is swiftly dealt with: “The day her parents caught little Susanna in the bathroom Scotch-taping up the corners of her eyes, they enrolled her in Irish step-dancing.”

In attempting to send-up sensitive, epoch-spanning cultural stereotypes, Gartner manages to reinforce them in the most unpleasant way possible. And calling the loathsome parents caricatures doesn’t really make sense either, since by definition a caricature sends-up a recognizable person.

The book’s title story has similar deficiencies, but suffers even further when compared to Caroline Adderson’s recent novel, The Sky is Falling, with which it shares uncannily similar subject matter. In both, ex-female terrorists (environmental vigilantes, in both cases) try to live average middle-class lives while being crippled with fear for the safety of their young sons. While Adderson made this the foundation for an acerbic, nuanced study of dread in the post-911 landscape, Gartner once again brandishes her blunt instrument to disturbingly unfunny effect. Her own “recovering terrorist”—one supposedly haunted by the unbearable guilt of once having killed an innocent girl in a misbegotten arson attempt—falls off the wagon. For what? The satisfaction of bombing the next teenager-driven car that barrels down her street.

Gartner’s writing style doesn’t help matters any. Her strained formality often results in awkward constructions, such as: “When his eyes are closed it’s easy to imagine Dodge is still a child, filled with wayward charm and bereft of the flinty humour”; or bizarre, arbitrary descriptions: “the wig hovered overhead like an antediluvian bird.” (A bird: yes, but why is a floating wig more like an antediluvian bird than a postdiluvian one?) She is also prone to tautologies: “redolent of the smell of” and undermining cultural errors, as when a couple is disparagingly referred to as wearing “J J Bean.”

Satire need not necessarily aspire, as Dryden claimed it should, to the “amendment of vices.” It does, however, require humour and reference to some kind of underlying point of view, neither of which is apparent in Better Living Through Plastic Explosives. Gartner may set only four of her stories on cul-de-sacs but this is ultimately where most of them lead.

— Emily Donaldson is a freelance critic and editor