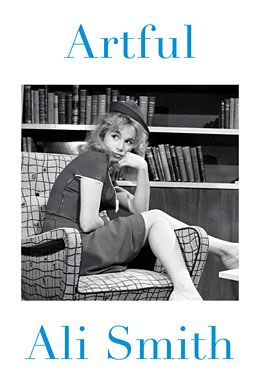 Artful was originally a series of lectures delivered by Scottish novelist Ali Smith at Oxford University in the winter of 2012. Although the titles of the book’s four essayistic parts: “On Time” “On Form” “On Edge” and “On Offer and On Reflection” sound like standard academic exposition, their contents most assuredly aren’t.

This isn’t just because Smith is not an academic. It’s partly because she inserts, between us and the things she sets out to say about art and literature, a fictional narrator visited by the putrescent ghost of her dead lover, a writer/academic who was working on four lectures about art and literature when she died (The narrator is actually genderless; but given that Smith is gay and writes about gay issues, it’s fair to think of her as a woman).

As the book begins, our still-mourning narrator has finally mustered the courage to enter her partner’s study. As she mulls the contents of the undelivered talks, a picture of the couples’ relationship starts to emerge. The narrator, an arborist, is a fan of the “low arts”—she knows the 1968 movie musical Oliver! better than Oliver Twist (the title’s “Artful” is a reference both to Dickens’ Artful Dodger and the notion of artfulness itself)—and we sense that the lover’s highbrow sensibilities were sometimes a source of insecurity. When she comes across Charlie Chaplin and Hitchcock references in the lectures (a clear sign of her influence), she feels the belated thrill of having been taken seriously.

Read the full review at the National Post’s Website:
http://arts.nationalpost.com/…artful-by-ali-smith/