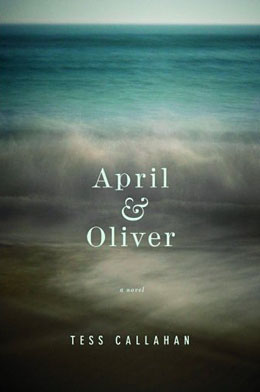 Tess Callahan’s debut novel begins with a car careening off the highway, killing its teenaged driver, Buddy, as he returns home from a winter hunting trip.

His sister April is left devastated, having practically raised him in the wake of their own mother’s death. With her father recently gone, her grandmother, Nana—now battling memory loss and the crippling effects of a stroke—is April’s last living relative.

At Buddy’s funeral, April is reunited with her childhood friend Oliver, back in town with his fiancée after five years at a California law school. April and Oliver are something more than friends, something less than cousins. They share Nana as a grandmother, but not by blood. They also share chemistry, despite personality differences. A one-time piano prodigy, Oliver is the measured, cautious one while April, dark and unpredictable, has a penchant for loveless relationships with older, controlling men.

Now in her late twenties, April tends bar and lives in a seedy area of town. She has just broken up with her latest “beau,” T.J.—a volatile, scar-riddled loner whose ex-wife died under dubious circumstances. Violating a restraining order she had asked for only weeks earlier, April finds herself falling back in with T.J. after Buddy’s funeral.

A mixture of concern for April’s safety and barely checked personal feelings has Oliver running interference in her life at a time when he’s supposed to be planning his wedding to his angelic, blue-eyed, bride-to-be, who does her best to remain sanguine about the threat April may pose to her future happiness. This is a novel that plays itself out around threats: the physical ones posed by violent men like T.J. as well as the emotional ones posed by death (Buddy) and unrequited love (April and Oliver).

It’s hard to begin describing where this novel falls off the rails—generously assuming there were rails to fall off in the first place, which I’m not convinced of. There is, first, the problem of setting. The novel takes place in the boroughs of New York City, areas familiar to so many people that they almost scream out for attention, yet very little ink is spilled to establish a sense of place. Rather, the atmosphere—of insularity and pent-up violence interspersed with descriptions of blowing leaves and slanting sun—evokes small-town America to the degree that occasional glimpses of the Manhattan skyline come as a shock.

The Nana character is another fatal flaw. April and her family decide not to tell her about Buddy’s death, worried she may not be able to handle the news. This is understandable initially, but by the time she is sitting in the pew at Oliver’s wedding a full year later, Nana still hasn’t been told. The implausibility of this lies way beyond the pale, particularly given the fact that, despite occasional bouts of confusion, this is a woman who, we are told, is “hard to pull one over on” and who “catches everything.”

April & Oliver anchors itself on the supposed clash between its titular personalities but too often their differences are trite or contrived, as during a scene at April’s apartment where she makes the supposedly lowbrow move of offering Oliver (a student in his twenties) a beer:

He hasn’t had a beer in years. He prefers wine now, quality labels because the cheap stuff gives him a headache. He takes the beer.

April may live on the wrong side of the tracks and date the wrong guys, but we know she’s deep because she reads books by Stephen Hawking and Flannery O’Connor. Commenting on a book by her bedside, Oliver begins this exchange:

“I see you still like to read,” he says.

“We all have our escapes, right? You understand; you’ve got your piano.”

He shifts uncomfortably, taking a swig of beer. It tastes better than he remembered.

Something fundamental about fiction is that actions, details and consistency matter terribly—they need to add up to something in a way we never expect them to in real life. Callahan fails to grasp this: she holds our hand through the big stuff, worried we’ll miss the point, but forgets the small things that might have more subtly built her case. April & Oliver delves into the serious topic of abuse-seeking behaviour, but Callahan so radically undermines her own credibility that all we are left with is melodrama, plain and simple.