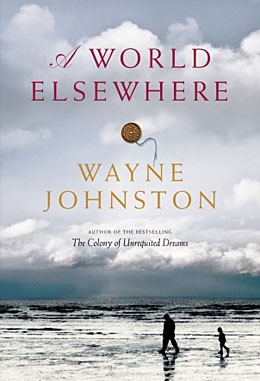 A WORLD ELSEWHERE
by Wayne Johnston

Wayne Johnston has made a habit of blending historical fact and fiction in his novels, but the scales tip decidedly towards the latter in this riches-to-rags-to-riches-and-back-to-rags tale inspired by the author’s visit to Biltmore—George Washington Vanderbilt II’s massive faux French chateau in North Carolina. Built in the late 1880s at the height of the so-called Gilded Age, Biltmore is still the largest private residence in the U.S. 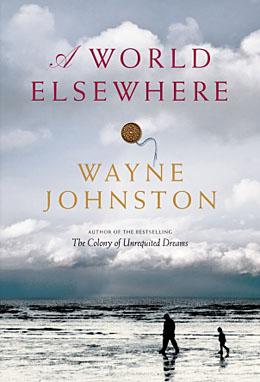 A World Elsewhere gives us the Vanderluydens, a hybrid of Vanderbilt and Van der Luyden, the magnate family in Edith Wharton’s Age of Innocence. Biltmore itself becomes Vanderland (a name I kept reading as Neverland, Michael Jackson’s infamous ranch). Like many of Johnston’s novels, this one ranges between Newfoundland—depicted as always in the harsh but irresistible light that compels its people, mothlike, always to return to it—and America, its promise of a better life tantalizingly glimpsed but never grasped.

Our hero, Landish Druken, is the hale son of Newfoundland’s most successful sealing captain, a cruel, spiteful man with the claim to fame of being the first in the world to “bring home” a million seals. If he wants his father’s fortune, Landish will have to follow in his footsteps. But despite having arms custom-bred for clubbing baby seals, Landish has other plans—he wants to write novels instead. Landish makes a deal with his father: if he sends him to Princeton for four years, Landish will give him the balance of his life in return.

At Princeton, without a family name to fall back on, Landish gets by on his rapier wit. His bravura attracts the attention of Padgett Vanderluyden, the self-described “dud” of his powerful family. At home, “Van” was suspected of causing the death of his baby sister; at school he is suspected of being a homosexual—something Landish’s decision to move into his three-storey townhouse does nothing to dispel. Kept on a steady diet of cognac and cigars, Landish helps Van by writing his essays. When Van is eventually caught, it is Landish who takes the fall. Landish returns to St. John’s, breaks the pact with his father, and is immediately disowned.

When Van’s father dies he is “disowned” too—in the Vanderluyden sense of the term. His inheritance is only one-tenth of his brothers’, yet still more than enough to fulfill his dream of building the “greatest house in the world.”

His disownment having made him virtually unemployable, Landish now lives in a state of penury in an attic less than a mile from his father’s lavish mansion. Every night he sets to work on his “novel” then promptly burns very page. Despite his dire circumstances, Landish takes on the guardianship of a young orphan named Deacon, his mother having explained in a letter how Landish’s father allowed the boy’s father to perish while trying to save his crew on an ice during a blizzard.

Landish and Deacon’s straits become so dire Landish eventually petitions Van—the cause of his predicament—for help. The two travel by Vanderluyden-owned boat and train to the Carolina Castle where they find a haughty, distant Van living lovelessly with his wife and the daughter he is rumored not to have fathered in splendid isolation with an army of servants. From here the novel’s plot, along with its setting, takes a decidedly byzantine turn. Suffice it to say that Johnston would like us to know that money doesn’t buy happiness.

A World Elsewhere is built around extremes, and as such leaves nothing for readers waiting expectantly in the middle. Johnston’s characters either own everything as far as the eye can see, or can fit their entire lives into a carpetbag. Landish’s father is a murderer; Deacon’s a martyr. Deacon is bright, the orphan-with-a-heart-of-gold; Van’s daughter Goddie a dim, spoiled brat with a sadistic streak.

The same applies to the characters’ physical descriptions. Landish is “as broad across the shoulders as the doorway of a church,” Deacon so thin that Landish’s little finger is “thicker than the boys spine, a tiny cage of cartilage so delicate that he might crush it with the slightest pressure of his palm.”

Although there are shades of Johnston’s erstwhile brilliance, especially in the early parts of the novel, what we ultimately end up with is a cast of caricatures who, having wandered off the pages of Oliver Twist, manage to stumble into Disneyland. Johnston writes scenery like no one else, yet he rarely gives himself a chance to do so here, his characters being either too rich or too poor to leave their homes. Johnston has struggled to regain the heights he reached with The Colony of Unrequited Dreams 13 years ago; A World Elsewhere is not the novel to restore him to that lofty pedestal.

Comments: Comments Off on A WORLD ELSEWHERE
by Wayne Johnston Posted by: admin Categories: Adult Fiction, Reviews Tags: age of innocence, clubbing baby seals, fact and fiction, neverland michael jackson, private residence, Toronto Star
← THE TRAGEDY OF ARTHUR
by Arthur Phillips
THERE BUT FOR THE
by Ali Smith →