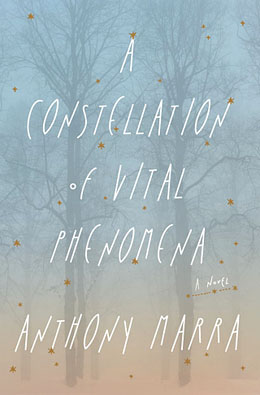 A CONSTELLATION OF VITAL PHENOMENA
by Anthony Marra

In a landmine-strewn Chechen village, a failed physician named Akhmed watches as his friend Dokka is removed by authorities, the house where he once sheltered refugees burned to the ground. Fearing for the safety of Dokka’s eight-year-old daughter Havaa, Akhmed whisks her away to a hospital in a nearby town where he hopes to entrust her to the care of its legendary female surgeon. When Sonja Andreyevana, an ethnic Russian and the last of a staff of 500, balks at his request, Akhmed volunteers to stay and work for her.

Anthony Marra’s ballyhooed debut is one of the few—possibly the only—English-language novels to take place in Chechnya. That its release happens to coincide with a surge of interest in the troubled Russian republic in the wake of the Boston bombings is, as we all know, the kind of macabre luck book tours can’t buy.

It’s not an action-packed plot; Marra focuses instead on a slow revelation of the characters’ interconnectedness as he seesaws within a decade beginning with first of two Chechen wars (1994–2004). These are characters whose imperfect virtue is amplified by their various sacrifices and losses. Brilliant, hard-as-nails Sonja gave up a budding career in London to come back for her sister Natasha, who recovered from a life of enforced prostitution only to vanish in the wake of the Russian bombing of Grozny. Rescuing Havaa means that Akhmed must leave his helpless, bedridden wife—who suffers from a form of early dementia brought on by war—alone all day.

Akhmed’s one-time schoolmate Ramzan is the novel’s most despised character and arguably its most tragic. As a child Ramzan’s father Khassan ignored him, preferring instead the Sisyphean task of re-writing his six-volume history of Chechnya for the pleasure of whatever regime held power. Now Khassan ostracizes Ramzan for being an informer—a role he resigned himself to only after enduring torture and castration.

Like someone taken with the zoom feature on his new camera, Marra has a tendency to shift rapidly between fact-driven Wikipedia-mode and emotional close-ups. What often gets lost is the middle view. Akhmed’s village has no electricity but food doesn’t seem to be much of a problem—why? Though the villagers are (presumably Sunni) Muslim, the role of religion in their everyday lives gets downplayed; there’s no mention of a mosque and daily prayers are referred to only occasionally.

Marra’s writing can be elegant, though it has a distinctly American sensibility. This may be partly because he chooses to leave foreign words out of his dialogue—a strategy frequently used by authors who want to remind us the language their characters are speaking isn’t really English. But it’s also because he has a taste for the grand, symbolic gesture, a need to close loops. There’s a fair amount of redundant psychologizing: “Something in you is broken,” Akhmed tells Sonja; and later, “War is unnatural … it makes people act unnaturally.” And sentences like “[Ramzan] had forgotten torture could be so exhausting,” seem more like something you’d say about applying for a passport.

To wit, a number of details sit uneasily. Even after the Feds cut his fingers off with bolt-cutters, Dokka insists on wearing button shirts (why?), which he fastens with his toes (how?) And would the only nurse at a hospital “overwhelmed by the burden of care” really sit around all day knitting?

The novel’s length, scope and its author’s relative inexperience make this, by default, an “ambitious” novel. Marra clearly has what it takes to succeed in the long term, but he can’t do it by cutting out the middleman, which in this case happens to be Marra himself.

Comments: Comments Off on A CONSTELLATION OF VITAL PHENOMENA
by Anthony Marra Posted by: admin Categories: Adult Fiction, Reviews Tags: Chechnya, Fiction, Toronto Star
← YOU ARE ONE OF THEM
by Elliott Holt
GOING HOME AGAIN
by Dennis Bock →