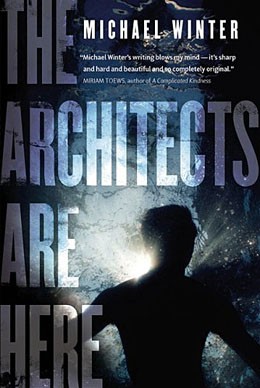 THE ARCHITECTS ARE HERE
by Michael Winter

With this, his third novel, Michael Winter resurrects his fictional alter ego Gabriel English, this time allowing Gabriel to wander farther afield from his (and Winter’s) native Newfoundland to Toronto, Montreal, and back again in a plot that is part road story, part mystery, and part revenge saga. 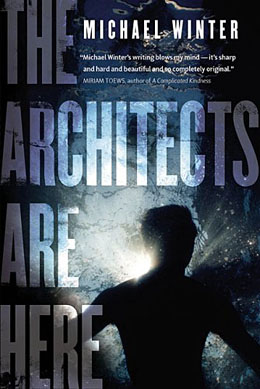 The pivotal character here is Gabriel’s childhood friend, David Twombly, a charismatic yet deeply flawed personality with self-destructive tendencies. The novel opens with a gripping account of the drowning death of David’s brother Zac as the two return by boat from a moose-hunting trip. Burdened with guilt over Zac’s death and the silent reproach of his father, David leaves Newfoundland and embarks on a successful career in the high-tech sector, making a pot of money for himself and investors such as Gabriel just before the bubble bursts.

The fates of Gabriel, David, and David’s father, Arthur Twombly, are inexorably intertwined through an unlikely femme fatale: Nell Tarkington. Smitten by Nell when their paths cross in Toronto years after their initial meeting, Gabriel becomes her live-in lover. Their bliss is disturbed, however, when Gabriel discovers the emotional stranglehold she has on the two generations of Twombly men. Complicating things further is the fraught relationship between the Twomblys and the Hurleys, a sinister clan with a few bones to pick with Arthur and David.

Winter’s style is one of self-conscious minimalism. While he does not attempt to mimic local accents, he dispenses with the niceties of most punctuation, including quotation marks, question marks, and apostrophes (arent, dont). These devices might be effective in a shorter work, but in a novel of this length they tire the reader’s eye and lend a flatness to the prose that is at odds with the book’s many – and sometimes improbable – dramatic turns. And the first-person narrator sometimes gains a degree of omniscience that can also be problematic for the reader.

Winter has an admirable command of detail, turn of phrase, and narrative texture, and his book contains frequent moments of insight, but in the end these elements fail to coalesce, tending, instead, toward a narrative sprawl that undermines the novel’s lofty ambitions.