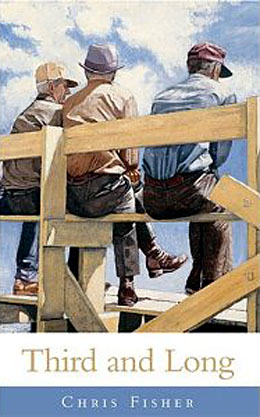 THIRD AND LONG
by Chris Fisher

The eight stories in Third and Long, Chris Fisher’s third collection of short fiction, share settings in small prairie towns and narratives based on the subject of sports. Fisher, who has lived in more than half a dozen Saskatchewan towns, and who plays and coaches hockey and baseball, is obviously writing about a topic close to his heart.

These are worlds populated with men bearing nicknames like Hummer, Leaky, Hairball, and Stilts, who drink “brewskis” after the game and reminisce about famous plays. The collection assumes that the reader has both a passion for and a decent working knowledge of the rules and rhythms of such games as baseball, hockey, and football. But while sport is the central theme in all the stories, as a metaphor it never rises above its most conventional associations with male bonding and notions about forging a sense of community through individual effort.

These are mostly feel-good tales in which underdogs prevail against the odds. The pattern is particularly evident in the title story, in which personal, civic, and cultural pride are put on the line when rival towns – one French, the other English – compete in a football game. In “The Road Less Travelled,” a son makes an emotional connection with his ailing father when they take a final road trip from Saskatchewan to Toronto to visit the Hockey Hall of Fame and attend a Maple Leafs game. The obvious exception to this generally sunny outlook is “Hurdles,” which broaches the subject of sexual abuse between a coach and a teenage athlete.

After a while, though, the sports theme starts to wear a bit thin and feel self-conscious. And while competent, Fisher’s writing is simply not strong enough to pull these stories above the level of the parochial and connect them to a larger world.