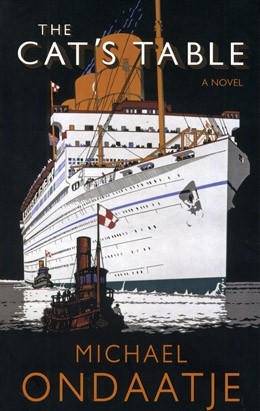 THE CAT’S TABLE
by Michael Ondaatje

A vaguely autobiographical bildungsroman set at sea in the early 1950s, The Cat’s Table takes place aboard the Oronsay, the ocean liner that will take 11-year-old Michael from Colombo, Ceylon to England, where he will be reunited with the mother he hasn’t seen in years. Cruise ships offer us a simulacrum of the world and society, and Michael’s awakening from innocence is duly compressed, time-lapse style, into the 21 days of the voyage that will take him, epically, over two seas, an ocean and through the Suez Canal. The Oronsay may be chickenfeed compared to today’s grotesque, floating theme parks, but to young Mynah—as he becomes known—whose only “ship” up until this point has been dugout canoe and whose longest trip was an egg-sandwich-fortified car ride between cities, it is nothing short of palatial. What the Oronsay lacks in buffet tables, conga lines and glitz it more than makes up for in intrigue, characters and old-world patina. 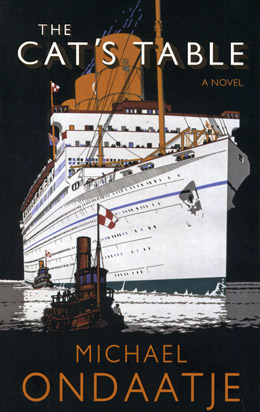 As a first order of business, Michael receives a note under his door telling him he has been assigned to Table 76 for his meals—the Cat’s Table. It is, as one of his fellow diners, Miss Lasqueti, informs him, the furthest from the Captain’s table and therefore the ship’s “least privileged place”—“least privileged” being, in this case, a palimpsest denoting “most interesting.”

At the Cat’s Table Michael meets two boys around his own age: the asthmatic, delicate Ramadhin and the brash, scornful Cassius. The culture of the Oronsay is all hierarchy and class, yet the three boys—surrounded by adults but ruled by none of them—immediately recognize in their situation the carnivalesque opportunity to “escape all order.” Flavia Prins, an acquaintance of Michael’s family in First Class who has promised to keep an eye on him, goes about fulfilling her duty in the most halfhearted way possible, much to Michael’s relief. Setting themselves the single rule to do something forbidden each day, the trio swim in the First Class pool in the early hours of dawn and hide out in the hanging lifeboats, where they feast on emergency rations of chocolate and eavesdrop on adult conversations. They take advantage of a “buggered latch” to enter the armoury, where they paw the revolvers and handcuffs kept there. For kicks, they lash themselves to the ship’s deck during a violent storm, effectively waterboarding themselves and nearly perishing in the process.

Their youthful tendency to subversion is abetted by the boys’ encounters with a series of characters on the ship, each one the gatekeeper to a discrete, mysterious world with the potential to chisel a further notch out of their collective virtue. At the Cat’s Table they meet Max Mazappa, a ribald, worldly musician who stuns them with his obscene lyrics and loaded metaphors: “When I came home from my last tour, I found a new mule kicking in my stall…. You know what I mean?” While Mr. Daniels, a botanist, offers to show the boys his garden of exotic plants, located, Dante-esquely, at the lowest level of the ship’s hold. As Michael and friends quickly discover, however, one of the garden’s most “exotic” aspects is its proximity to a mural of naked women painted astride gun barrels. With Old Testament gravitas, Mr. Daniels implores them to resist touching his “deceptively attractive” specimens (among them the “angel’s trumpet” and “devil’s trumpet”). That which “sharpens the mind,” it turns out, is indistinguishable from that which can kill you.

But the most enigmatic member of the Cat’s Table is the wan, spinsterish Miss Lasqueti who, on top of being prone to flinging paperbacks she doesn’t like into the sea, is rumoured to carry a pistol and to keep a flock of pigeons somewhere on the ship. The Cat’s Table may be an impecunious lot but they are not powerless: with his plants, Mr. Daniels has the power to “poison a dictator” or cure any number of diseases; Miss Lasqueti has “often been seen in the corridors of Whitehall.” Perhaps the archest embodiment of this principle is Mr. Nevil, who reveals himself to be a professional ship dismantler.

The Cat’s Table is not big on plot, although Ondaatje does try to build suspense through the presence of a mysterious prisoner on the ship, whose crime is unknown, and who appears only at night, for walks. For Michael, Ramadhin and Cassius, the sound of the prisoner’s chains sepulchrally dragging along the ship’s decks is so irresistible they take to sleeping during the day in order to keep vigil at night. Ondaatje has always had a partiality for the hung, cinematic moment and the denouement of the prisoner plot is what eventually provides that opportunity here.

“You must keep your ears and eyes open. It’s an education out there,” Miss Laqueti gnomically intones. And Michael takes it to heart, rounding out his music and botany lessons with forays into the sexual (through an undisclosed intimacy with his glamorous older cousin Emily); the intellectual (through the bookish Mr. Fonseka, a teacher to-be who quotes endlessly from his library of Orwell and Gissing) and even the criminal (through the Baron, a petty thief who conscripts Michael to break into cabins by working his slender, oiled body through their transoms). Ondaatje’s investment in the novel is squarely in his characters, who are colourful, yes, but sometimes almost blindingly so. In particular, Ondaatje’s depiction of Sir Hector de Silva, a reclusive millionaire philanthropist who is suffering from a fatal illness brought on by a curse that seems to cause dogs to attack him indiscriminately, borders on the burlesque. What with the millionaire (and his wife), the captain, the glamour girl and the professor all in attendance, it’s possible at times to imagine we’ve stumbled upon the cast of Gilligan’s Island before they got marooned.

Still, there are moments of subdued beauty, too. A passage describing the ship travelling after midnight through the Suez Canal “at the speed of a slow bicycle, as if within the gradual unrolling of a scroll” stands out for its haunting, dreamlike strangeness. Michael and his friends spend the night raptly observing activities whose legality they cannot really gauge, their senses muted by a darkness “full of suggestion.” Years later, the seminal, catalytic quality of the experience is confirmed when Michael, who has not seen Cassius since the Oronsay, tries to surprise his old friend by travelling to London to attend the opening of a show of his paintings. Michael never finds Cassius, he has got the day wrong, but it slowly dawns on him that the paintings, which he had taken to be abstracts, all depict aspects of their night on the canal.

As a rumination on the nature of power and the power of experience the novel’s central lesson is wistfully summed up by the narrating, elder Michael, now a famous writer looking back on his youth: “What is interesting and important happens mostly in secret, in places where there is no power. Nothing much of lasting value ever happens at the head table, held together by a familiar rhetoric.” Yet there’s an irony to this self-referencing, which is that, having become the lingua franca of so many of today’s writers, Ondaatje’s minimalist style no longer startles as it once did; his writing is indeed “familiar rhetoric” to us now. The Cat’s Table is not Michael Ondaatje’s greatest book, but it is often funny, frank and diverting. Overall, it charms more than it challenges, which shouldn’t really be all that surprising coming from a writer that today, in literary terms, finds himself sitting comfortably at the head table.

—Emily Donaldson (from the Spring 2012 issue)

Comments: Comments Off on THE CAT’S TABLE
by Michael Ondaatje Posted by: admin Categories: Adult Fiction, Reviews Tags: Canadian Notes and Queries, CNQ, Reviews
← THE LAST NUDE
by Ellis Avery
UNDER THE MOON
by Deborah Kerbel →