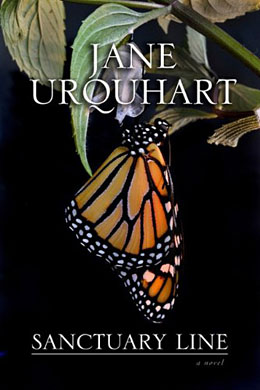 Sanctuary Line has at once the sprawling feel of a multi-generational epic and the shuttered confinement of a one-act play. This is because the action rarely leaves a single setting and season: summers at the 150-year-old Butler family fruit farm on the shores of Lake Erie.

The main storyline begins in the 1980s, with the farm under the relatively benign governance of Stanley Butler. Although the farm’s orchards are not what they were in the day of the “Great-greats,” Stanley is considered a bold innovator for his use of imported Mexican labour and chemical fertilizers. Narration is from the present day by Stanley’s niece, Liz, the “spoiled city cousin” who spent her childhood summers on the farm playing with her cousin, Mandy, and the latter’s two brothers.

In 19th century Ireland, we learn, the Butlers “bifurcated” into two strains: farmers and lighthouse keepers. The division persists into the New World, the lighthouse keepers setting up shop in the U.S., the farmers across the lake in Canada. Tales of these far-blown relatives are one of the great pleasures of the novel. One of the best examples is Urquhart’s story of two barn-burnings wrought by American and Canadian Butler cousins, both with entirely different consequences. These tangents give the novel its depth and allow Urquhart to flaunt her masterful storytelling abilities.

Among the annual influx of Mexican workers is a young boy, Teo, and his mother, Dolores. Teo is coddled and adored by the workers but Stanley also given him unspoken permission to run with the other children, which he does despite language difficulties and occasional cruelty from the Butler boys. As they turn into adolescents, the dynamic between Liz and Teo changes. Liz has always protected Teo, and now, he tells her in his quiet, halting way, he is besotted with her.

This is a story of innocence lost—and a value-added one at that, featuring not just one tragic love story, but three. Summers at the farm are portrayed as a bucolic idyll, the time before the family’s fall and the counterpoint to the personal catastrophes ominously and persistently foreshadowed from the beginning. Liz, now an entomologist, has returned to the farm to study the migration patterns of the monarch butterflies that congregate there. Now, however, all she has for company is her relatives’ dusty crockery and furniture: Stanley disappeared 20 years ago without a trace and Mandy, a military officer, has recently been killed in Afghanistan. Liz’s mother is in a retirement home in Toronto where she stubbornly resists discussing the past. Stanley’s wife, Sadie, also lived at the home until her death, but “in a different wing, one that is not so pleasant to visit.”

Urquhart loves the inter-connectedness of things, loves Ireland, loves the shores of Ontario lakes and loves the rise and fall of family fortunes—variations of which appear in most of her six previous, highly successful novels. She also loves symbolism, and here it is the monarch butterflies who take on the burden of that role, their migratory habits (between Mexico and Canada), fragility and generational permutations making them ripe for frequent, but unfortunately sometimes rather banal, comparisons with the novel’s human drama.

For instance: “Arriving each summer as we did from somewhere else, and then departing again at the end of the season, we were migratory in nature, the differences in our migrations being those of direction and distance and the fact that while I was away from “home,” I was still in what could be called my natural habitat.”

Or: “How frail each life is. We mow a meadow and kill a thousand butterflies. The racket of the mower the sound of a fist hitting flesh, an American bomb striking a Middle Eastern city—perhaps in the way of these things the only difference among them is that of scale.”

Liz is presented as so numbed that she can only interpret the past through the methodology of her work. Thinking of Mandy’s particular tragedy, she explains: “even now I can only understand it in the way that I understand butterflies; I know what they do, but I am at a loss to explain why they do it.”

This gets a bit much. The butterfly similes intrude because they offer an exegesis we don’t need: the story is complex and thought-provoking enough without them.

Aside from such irrepressible flourishes, this is one of the most grounded of Urqhuart’s novels. Urquhart builds stories like an architect, one who relies on solid engineering to ensure soundness. Stanley, volatile and enigmatic, is the novel’s most compelling character, and the brilliance of Urquhart’s powerful ending is that it makes us want to start again from the beginning and re-consider him under the new light it casts.