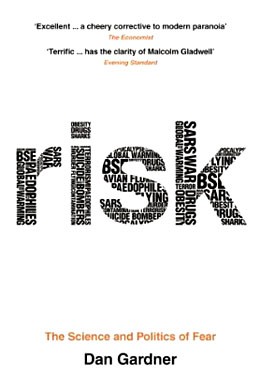 RISK:
The Science and Politics of Fear
by Dan Gardner

“We are the healthiest, wealthiest, and longest-lived people in history. And we are increasingly afraid. This is one of the great paradoxes of our time.” So writes journalist Dan Gardner in this important, compellingly argued book. And what do we fear most? We fear pedophiles stalking or murdering our children, we fear dying from cancer, we fear chemicals in our environment, contaminants in our food, acts of terrorism, and the tidal wave of crime in our neighbourhoods. But do any of these risks constitute viable threats to our livelihood? In each of the above cases, Gardner argues they do not. And yet Gardner is neither a reactionary, a naysayer nor a contrarian. He is, rather, that rare beast that questions what he is told and looks at the big picture. 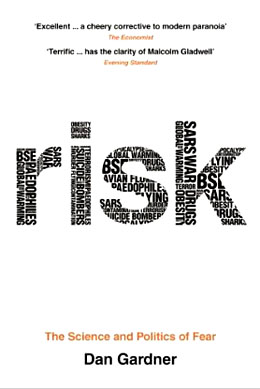 We fancy ourselves sophisticates living in the information age, but we do so saddled with the hand-me-down brains of our stone age ancestors; brains better adapted to the now non-existent threats of an ancient world. We tend to be ruled by our (less reliable) guts than our (more evolved) heads. We have other unfortunate tendencies, as well. We have a weakness for stories with emotional impact, we are suggestible, even by random influences, we seek information that confirms what we already know and we tend to deem things common if we can recall more than one example of them. Leave such a creature prey to a media that thrives on an “if-it-bleeds-it-leads” sensibility, corporations seeking to profit from our fears, and governments looking to get elected by playing off our desire for security, and you’ve got the recipe for a nation of Chicken Littles living under a sky full of acorns.

Take cancer. Most of us know the alarming statistic that half of all men and a third of women will get cancer. Cancer is rarely mentioned without the word “epidemic” attached. But despite appearances to the contrary, cancer remains a disease of the aged in a species whose lifespan continues to lengthen. Florida, with its many retirees, has three times the cancer rate of Alaska, but when the death rates for these states are age-adjusted, they’re almost identical. Childhood cancers have been stable since 1985, when the advent of improved diagnostic equipment increased detection of previously unseen manifestations of the disease. So why do we see so many stories about young women or children dying of cancer? The simple answer is that the plight of the vulnerable makes good copy. But it still doesn’t change the fact that this is not the demographic predominantly dying from the disease.

In the case of crime, the media image of the problem is upside down, with common crimes ignored in favour of rarer events of the “true crime” variety. Gardner gamely puts in a plug for the laudable intentions of his fellow journalists, but then goes on to cite countless other instances of media hype distorting reality. Media coverage of school shootings has led to many American schools locking out their communities, for example, but the chance the average student will be murdered at school is 0.00006 percent, a number considered by statisticians to be, effectively, zero.

Canadian children, likewise, are being raised like “battery chickens,” kept at home because of parents’ fears that they might get abducted. But when you consider that the chance of a child being abducted by a stranger is another statistical zero, the real risk then becomes the health of a sedentary child that may suffer from a very real threat like obesity.

An excellent chapter on the terrorist fearmongering in the aftermath of 9/11 draws our attention, among other things, to the profound divide in the attitude of two American presidents facing a national crisis. In 1935, FDR exhorted Americans that the only thing they had to fear was “fear itself.” Seventy years later, George W. Bush got support for the invasion of Iraq by playing to Americans’ simmering fears for their national safety.

Gardner is not arguing that the things we are anxious about are not risks, merely that many of them are not enough of a threat to merit the degree of attention we pay to them. After all, there is intrinsic risk in everything we do, but the things that are really killing us in droves: diabetes, car accidents and heart disease, are simply too mundane, too common, to make headlines. Gardner’s is essentially a plea to rationality and common sense, and he makes his case with exceptional lucidity. This is a book that — unlike the next series of looming “disasters” inevitably lying in the lurch — justly deserves our undivided attention.

Comments: Comments Off on RISK:
The Science and Politics of Fear
by Dan Gardner Posted by: admin Categories: Adult Non-fiction, Reviews Tags: Toronto Star
← AGAINST HAPPINESS
by Eric G. Wilson
THE CELLIST OF SARAJEVO
by Steven Galloway →