Her 16 works of fiction have established Francine Prose as one of the most dedicated pulse-takers of contemporary America. Whether it’s sexual harassment on campus (Blue Angel), reformed neo-nazis (A Changed Man) or the New Age movement (Hunters and Gatherers), Prose is an adept, satiric deflator of voguish pieties. 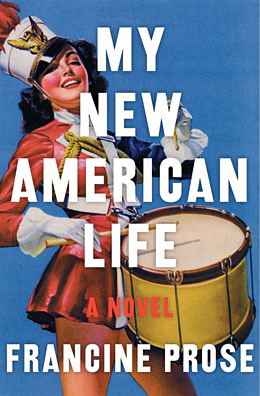 But although she’s been putting out books since the early 70s, Prose hasn’t let her characters age along with her. She still regularly writes fiction for young adults and much of what happens in her adult novels gets filtered through characters much younger than she.

This is certainly the case with My New American Life, whose protagonist, 26-year-old Lula, comes to New York City from Albania with dim hopes of achieving refugee status through a tourist visa. After a stint schlepping drinks in a Manhattan cocktail bar, Lula lands a job in suburban New Jersey as caregiver to a high-school student named Zach whose mentally ill mother recently abandoned him and his father.

As luck would have it, Mister Stanley—as Lula refers to her boss—is a bleeding-heart liberal desperate to relieve his conscience after trading up his job as an economics professor for an executive position on Wall Street. Mister Stanley turns Lula into his pet cause, conscripting his old friend, Don Settebello, a hotshot immigration lawyer who spends his time lobbying for political prisoners in Guantanamo, to get her a green card.

Reveling in her role as browbeaten refugee, Lula keeps her outraged benefactors on a steady diet of embellishments and half-truths about her actually-not-so-terrible past. Saying that her parents died in a bombing in Kosovo certainly sounds better than the reality: that her dad drove drunk into a NATO tank. And Mister Stanley and Don, who “acted as if coming from somewhere else was like having a handicap or surviving cancer,” merely abet her bad habit: “Being able to help you made them feel better about themselves and their melting-pot country. Their motives were pure, or mostly pure. They liked power and being connected, they liked knowing which strings to pull.” They also encourage Lula to write—unaware that most of her “stories” are plagiarized Albanian folk tales.

Despite her mendacity, Lula is not unscrupulous. She is loyal to Zach and Mister Stanley, and particularly enjoys the nights they gather in front of the TV to watch Tony Soprano drive his oversized vehicles through neighbourhoods “flatteringly near” their own.

It’s in a spirit of bored, thrill-seeking naiveté that Lula invites three thuggish Albanian lads who’ve been trawling the street in a Soprano-esque SUV to come into Mister Stanley’s house, where they smoke, put their feet up on the table and ask Lula to store a gun. Flattered at being called “sister” and attracted to their surly leader, Lula agrees, never bothering to ask how they know so much about her.

Prose is skilled at exploiting the looming sense of dread this turn of events brings. Lula is a willfully blind Red Riding Hood—waylaid not by one but three wolves—too titillated by the situation to see the obvious threat it poses to her newfound good fortune.

The plot unfurls entertainingly and unpredictably against a backdrop of post-Katrina, mid-bird flu USA presided over not by the “dim little boy who’d told a lie and set off a war” but by a man who strikes Lula as “much like an Eastern Bloc dictator minus the poufy hair”; a country where even acts of altruism are performed with a kind of stagy arrogance.

Prose doesn’t waste the comedic possibilities of filtering America through the eyes of an immigrant from one of the last few truly isolated Eastern-block countries: “[Lula] was impressed by the freedom of the American press to tell the world that their vice president accidentally shot his friend in the face. At home, it wouldn’t have been accidental. And he would have succeeded. Still, you had to watch out and not criticize, same as anywhere else. You could never predict when Americans, even Mister Stanley and Don, would get all defensive and huffy.”

Bitingly sharp and intelligent, Prose is a writer whose books seem to want to be drunk rather than chewed, and as with any good drink, it’s hard to stop at just one. Happily, this is an author that never cuts us off.