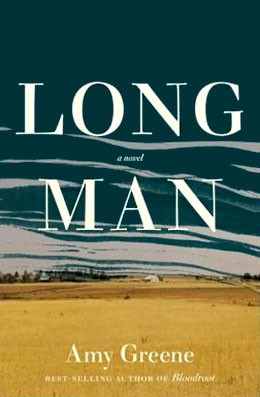 I’ll leave it to others to decide what it says about the zeitgeist that Amy Greene’s Long Man is the second novel I’ve come across this year that is set in Depression-era America and has as one of its main characters a one-eyed man named Amos who uses sabotage against those who plunder the earth’s resources for profit (the other is Dennison Smith’s Eye of the Day). And it’s only February. 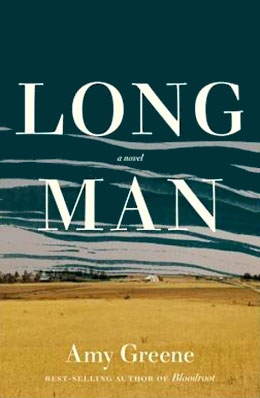 Like Greene’s debut, Bloodroot, the prevailing tone of Long Man is solemn, elegiac. Both books are set in Greene’s native Tennessee and have, by way of protagonists, fiercely independent women with unbreakable ties to the land.

But where Bloodroot stretched over four generations, Long Man telescopes its drama down to two antediluvian months in 1936 when the final exodus of the small valley town of Yuneetah is underway ahead of planned flooding by a government-owned power company.

As the novel begins, a young official named Sam Washburn is on his way to urge the final holdout—an intransigent, rifle-wielding woman named Annie Clyde Dodson—to leave her farm while she can still do so voluntarily.

Annie Clyde and her husband James’ sharply divergent feelings about the valley are rooted in their respective family histories. Though Annie Clyde’s farm has, like most in the area, long since ceased to be productive, the idea of losing it is, for her, akin to betraying the father she inherited it from.

Since the local river carried his own father away, James, on the other hand, has developed a kind of hatred for Long Man, as it’s known. Resigned to the dam’s inevitability and determined to embrace the progress it represents, he futilely tries to convince Annie Clyde of a future set around Michigan’s steel mills.

Greene gets so caught up in family history and evocations of landscape that Long Man’s real drama doesn’t kick in until a third of the way through. As they argue over dinner, Annie Clyde and James’ three-year-old daughter Gracie vanishes from the yard along with her dog, Rusty. Exacerbating their panic is the fact that the evacuation deadline is only days away and the water has already begun its slow, inexorable rise. Already, eerie, bowl-like depressions are beginning to swallow up Yuneetah’s abandoned homesteads.

Annie Clyde’s immediate assumption is that Amos, a local drifter just returned after a five-year absence, is responsible for Gracie’s disappearance. High above the valley, however, two solitary women with intimate connections to Amos think otherwise. Beulah, the 85-year-old seer and midwife who raised him from a foundling, and Silver, Annie Clyde’s bootlegging aunt who, against her better instincts, has always been drawn to his animal magnetism, know Amos is incapable of hurting a child. And it turns out they’re right: it’s the dam that’s set in Amos’ crosshairs.

Greene allows the backstories of this small but rich cast of characters to overlap in places, like thin pleats in a skirt. Her approach to writing about Appalachia is what you might call lovingly taxonomic: flora and fauna are rhymed off less as if she were attempting to describe them as to catalogue them for posterity.

The novel occasionally feels like a bit of a rallying cry for traditional American values—individualism, property rights, distrust of government—though Greene attempts to offset this with the suggestion that Amos’ motives are heartfelt but misguided and that Annie Clyde’s futile stubbornness represents, insofar as she’s fighting for her daughter’s birthright, a kind of proto-feminism.

The passion and detail with which Long Man evokes a distant past is often convincing enough to belie its author’s youth. The latter, though, is still felt elsewhere. At times, it’s not just water that threatens to flood Greene’s valley, but sentimentality too.