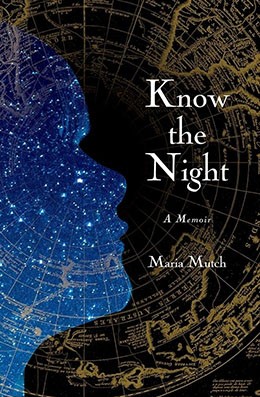 KNOW THE NIGHT
by Maria Mutch

“The dark is a sovereign country of the unknown, and a borderless one, at that,” Maria Mutch writes in this lyrical nocturne about the years she sat vigil with her non-verbal son when, starting at age nine, he gave up sleeping for nightly marathons of shrieking, humming and clapping. Though her husband was more than willing to pull his weight, Mutch doughtily resolved to face these long nights alone. She had various reasons for doing so; “ownership of this odyssey” was one of them. 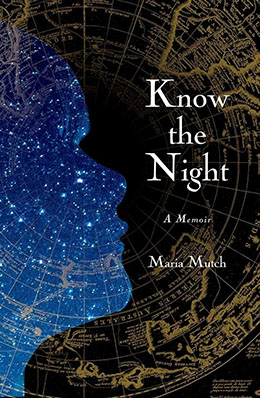 Looking back, Mutch sees the Down syndrome that was apparent when Gabriel was born as “an obscuring feint.” Many more diagnoses, including autism, were yet to come.

As a baby, Gabriel was silent. At two he started to acquire words only to lose them later. The latter process was gradual enough that it almost went unnoticed. Gabriel’s silence was “beguiling”—a word Mutch often turns to—and indeed, there’s a chill beauty to the manner in which his brief flirtation with speech came to an end. At age six he said “Bye”; a year later, “All done.”

In a crisis, what often works best is a simple dose of relativism; it’s always possible to find someone who’s in direr straits than you are. Few parents raising special needs children chose their situation, so Mutch turned to those who had willfully sought out solitude, cold and darkness, along with the latters’ attendant despair. She found them in mountain climbers and polar explorers whose accounts provided, if not always solace, then a malleable paradigm for her own relationship with Gabriel.

The book Mutch found herself repeatedly turning to was Admiral Richard Byrd’s Alone, which documents the explorer and aviator’s 1934 attempt to endure six Stygian months solo in an Antarctic hut (he lasted for four). The book resonated with her in unexpected ways. With his white-blond hair and “blue eyes that contain chips of white, like ice in a sea,” Gabriel visually conjured a polar landscape. And in Antarctica’s breaking away from the supercontinent millions of years ago, a process that eventually “covered its lush land and its secrets with ice,” Mutch felt she’d found a metaphor for her son’s slow retreat from language.

Even Byrd’s provision lists were a source of fascination, Mutch recognizing in them, as in her own endless list-making, the suggestion that disaster can be averted through simple acquisition.

In her persistence on going to a place—Gabriel—that continually rebuffs her, Mutch identifies with Byrd in obvious ways. As she transcribes for us Byrd’s account of his gelid hermitage though, we see the clear-cutness of these equivalences start to shift. The cold and isolation start to take their toll on his physical and mental faculties and Byrd, like Gabriel, finds himself losing language and, with it, a sense of himself.

Like most kids with autism, Gabriel has specialized interests, and Mutch has at least been fortunate that one of them is classic jazz (my mind always went to Charlie Parker first whenever Mutch referred to Byrd). For Mutch, jazz is a “night language,” so when she listens to Gabriel’s albums during her sessions with him “it feels like an understanding is being traded back and forth; it feels like empathy.” Mutch (who was born in Canada but lives in Rhode Island), also regularly takes Gabriel regularly to live shows, where the audience often responds to the physical way the music transports him.

Other aspects of Gabriel’s existence have mythological overtones for Mutch. His endless repetitions—shrieking, throwing things—lead her to revisit her university copy of Camus’ Myth of Sisyphus. The subterranean jazz clubs they frequent are, similarly, like visits to the underworld; the necessary journey across the Newport Bridge “like crossing over.”

There are shades of Huxley’s Doors of Perception in Mutch’s more analytical descriptions of how sleeplessness tipped her mental balance so that lucidity became the exception, not the rule. When it does come, she notes how things take on greater symbolic or aesthetic weight; how art has a new resonance.

In mood and style though, Know the Night reminded me most of Judith Schalansky’s sublime Atlas of Remote Islands—a book that I’ve found myself returning to again and again as Mutch does with Alone (though it’s subtitle, Fifty Islands I have Never Set Foot On and Never Will, emphasizes the element of free will lacking in Mutch’s situation).

Know the Night hews far closer to poetry or philosophy than self-help. There’s a particular poignancy in the way Gabriel’s lack of words has clearly fostered Mutch’s embrace of them (ironically, Mutch’s pregnancy brought on a case of writer’s block and she had to abandon the novel she was working on). It is a beautiful, singular book, one that someone who’s planning, say, a prolonged stay in a godforsaken place might consider bringing along so they don’t feel quite so alone.

—Emily Donaldson is a freelance critic and the mother of a fourteen-year-old boy with autism.

Comments: Comments Off on KNOW THE NIGHT
by Maria Mutch Posted by: admin Categories: Adult Non-fiction, Reviews Tags: Globe and Mail, Non-fiction
← STRANGE BODIES
by Marcel Theroux
ALL OUR NAMES
by Dinaw Mengestu →