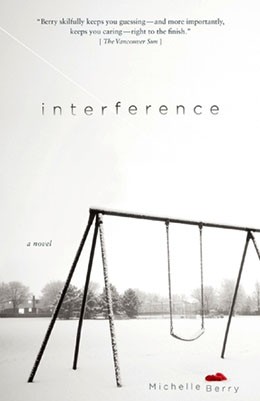 In her latest book, perversity, alienation, obesity, ominousness and manic humour continue to be grist for Michelle Berry’s fictional mill. Though it changes up the details, Interference largely maintains the form of Berry’s previous novel, Blind Crescent, about the personal goings-on in a suburb terrorized by a serial killer. The stage here, a small city called Parkville, is supposedly larger (though only by degrees), while a local pedophile ring supplies the requisite sense of unseen menace. 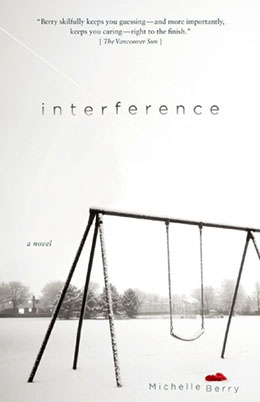 The burden of the novel’s action, which ranges in tone from fraught to farcical with little in between, is shared between four neighbouring households. In one, Claire unstoically endures treatment for breast cancer while Ralph tries to hide what may be stress-induced dementia. In another, Trish’s custom-Teddy Bear business has come under pressure from an American company that’s vaguely threatening her with copyright infringement. Next door, blonde, attractive Dayton is also under threat: her serially philandering ex-husband has vowed to reclaim the baby daughter she kidnapped away from him in California. Moving across the street, Tom Shutter, an engineer whose work entails, perplexingly, “remembering numbers and codes, dealing with clients and proposals,” has developed a wandering eye, though inwardly he still professes love for his wife Maria. Tom and Maria’s 12-year-old daughter Becky, meanwhile, has inherited her mother’s obsession with germs and cleanliness and also suffers from debilitating nightmares whose details she can never recall.

That personal malaise and hideous crimes sometimes lurk behind the contended façade of small-town or suburban living has become, both in pop culture and reality, accepted to the point of cliché. Yet Berry tends to treat her characters’ isolation and anxieties as revelation rather than as assumption.

Emotionally speaking, Berry prefers painting in primary colours. She especially likes red. Claire’s cancer makes her “nothing but angry,” while her daughter Caroline is “angry, anxious, losing weight.” The combination of his mom’s illness and the fact that he’d rather be kissing his girlfriend’s brother than his girlfriend makes Claire’s son Jude “hot and angry.” Dayton’s reaction to her husband’s infidelities was to feel “sick and scared and angry.” Parental frustration and throwing her back out has made Maria “so angry lately. Every time she thinks of anything she sees red,” while Trish’s rivals in her senior women’s hockey league are, for some reason, “too competitive, too angry.” Even Leah, a peripheral character who plays in the league and who’s raising a special-needs child on Wal-Mart wages feels, with regard to her lot, “a violent-unfair-tempter-tantrum-furious anger.”

That’s enough anger, surely, to power the local arena. As it turns out though, the characters with anger issues also have loneliness issues—though they’re not willing to discuss either of them. E.M. Forster’s oft-quoted entreaty, “only connect,” apparently has little currency in Parksville: not only do Interference’s characters fail to connect with each other, they fail to try to do so, the trying being, as your mother or therapist will tell you, the important part.

And no wonder: on those occasions that they do reach out it generally backfires. When Claire announces she has cancer, for instance, her friends stop calling her, “as if cancer [was] contagious” (a surprising, almost medieval reaction given cancer’s ubiquity). When Dayton confesses her predicament to Maria, likewise, Maria, instead of feeling sympathetic or flattered by the intimacy, reacts with uncomprehending, childish competitiveness: “She had no idea why this woman was crying in her kitchen … Maria thought, I should be crying. I’m hurt. I’m lonely.”

This lack of connectivity disables the community in other, more crucial ways. Despite the fact that the local paper has provided a description of the cartoonish-looking leader of the pedophile ring—a short, balding wearer of brown suits with a Tourette’s-like verbal tic—nobody twigs when he shows up at the local bar, or at Maria’s house, where he cries and laughs incoherently while wielding pamphlets with actual child pornography on them. Instead, our hapless lot keep misidentifying other characters whose loneliness has driven them to hover creepily under streetlamps, or near the local schoolyard. One of these is Michael, a Boo-Radley-type with a deep scar running down his face whose only function, like the drifter in Blind Crescent, seems to be as a red herring for the pedophile subplot.

The novel’s title suggests that the lives it depicts have been interfered with—Claire’s cancer being the most tangible example—yet Berry’s characters are so thinly developed it’s difficult to imagine them stripped of their banal problems. Interference feels, in some ways, like a literary version of Munchausen syndrome: the only way Berry can get our attention is by keeping her characters perpetually sick or in crisis. We can’t wish for them to return to normalcy, what’s more, when such a thing doesn’t appear to exist.

Comments: Comments Off on INTERFERENCE
by Michelle Berry Posted by: admin Categories: Adult Fiction, Reviews Tags: Fiction, Globe and Mail
← THE ZHIVAGO AFFAIR: THE KREMLIN, THE CIA AND THE BATTLE OVER A FORBIDDEN BOOK
by Peter Finn and Petra Couvée
CLOUD
by Eric McCormack →