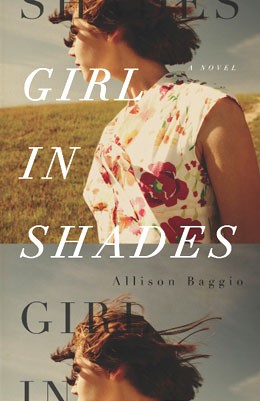 GIRL IN SHADES
by Allison Baggio

Growing up, Maya Devine never understood why her half-Irish mother dragged her to Hindu temple, or made her stand on the streetcorners of Saskatoon handing out passages from the Baghavad Gita. Maya has always been able to see people’s auras, but when she is 11, after her mother is diagnosed with cancer, she develops the ability to read minds. Ever the eccentric, her mother chooses to live out her final days in a teepee in the family’s backyard, attracting the curiosity of neighbours who believe her to be some kind of prophet. After her mother dies, Maya’s talent-agent father abandons her to live with his secretary, and Maya discovers an old diary of her mother’s that reveals a long-kept secret. 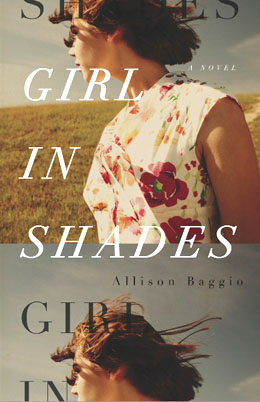 Allison Baggio incorporates an unusual mix of elements – including melodrama, Eastern mysticism, psychic ability, 1980s nostalgia, and even farce – into this coming-of-age story. Details, however, are frequently a problem. Maya’s mother refuses treatment for her cancer, but shaves her head because “she didn’t want to let cancer take anything away from her.” Readers are left wondering whether it’s the character or the author who isn’t aware that chemotherapy, not cancer, makes one’s hair fall out. In a debate about whether it’s worse to be blind or deaf, Maya’s aunt declares, “God, I can’t even imagine … not being able to see. I would pick deaf for sure.” This wouldn’t be such a bizarre statement if the aunt’s roommate didn’t happen to be a blind photographer.

Dialogue is another issue. Baggio has many of her characters speak with an odd formality peppered with incongruous cursing. They’re also prone to baffling pronouncements like “perspective is a strange beast – totally shaping what we think we know.” Baggio is keen to guide us with period references, but too often these are cumbersomely self-conscious. Pilgrimages to Maya’s mother’s teepee, for example, “became the cool thing to do. Like watching Miami Vice. Or trying to solve a Rubik’s Cube.” Awkwardness is to be expected in any coming-of-age novel, but it’s something we hope to find in the character, not the writing.

Comments: Comments Off on GIRL IN SHADES
by Allison Baggio Posted by: admin Categories: Adult Fiction, Reviews Tags: baghavad gita, coming of age, eastern mysticism, pronouncements, psychic ability, Quill and Quire
← THIS WILL BE DIFFICULT TO EXPLAIN
by Johanna Skibsrud
WHY BE HAPPY WHEN YOU COULD BE NORMAL?
by Jeanette Winterson →