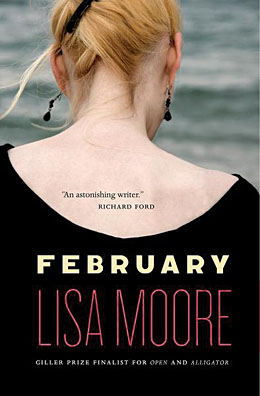 Lisa Moore’s second novel, following 2005’s Giller-shortlisted Alligator, employs similar time and perspective shifts to paint a portrait of Helen, a woman shattered by the drowning death of her husband, Cal, in the historically true sinking of the Ocean Ranger off the coast of Newfoundland in the early 1980s.

Now in her mid-50s and reconciled to loneliness, Helen sews prom and wedding dresses for a living and cares for her grandchildren. After having spent half a lifetime picking up the pieces after Cal’s death, she has taken the major step of renovating the house, and finds herself unexpectedly stirred by the presence of her carpenter, Barry. Another event has also rippled the relative calm: her son has announced that a woman he had a fling with is pregnant.

February is not plot-driven: the back-and-forth chronology is meant to flesh out emotional landscapes and fill in historical details. Although Moore writes with an almost brash economy, she cannot prevent February from coming off as an overly sentimental love story. Cal was the great and only love of Helen’s life, and she spends the 25 years after his death rather tediously reliving their time together and speculating about his final moments. The predictable conclusion, where Helen and Barry come together at a fireworks display, merges past and present in heavy-handed symbolism: “the light flew into their faces as silent as something at the bottom of the ocean.” As well, Moore has embraced the current vogue for removing the quotation marks from dialogue, which has the effect of robbing the characters of their immediacy: they are always filtered through the narrator’s sieve.

The book’s most unexpected, poignant moment features Helen sitting in a bar waiting to meet the man she has courted online over the past few months. When he never shows, Helen comes to the sudden, ego-crushing realization that he must have fled after seeing her. It’s a devastating, crystalline moment that would have worked as a short story – a genre at which Moore excels – but its impact is ultimately diluted by the novel’s amplitude.

Comments: Comments Off on FEBRUARY
by Lisa Moore Posted by: admin Categories: Adult Fiction, Reviews Tags: bottom of the ocean, emotional landscapes, fireworks display, picking up the pieces, Quill and Quire, something at the bottom
← THE GOOD MAYOR
by Andrew Nicholl
APRIL & OLIVER
by Tess Callahan →