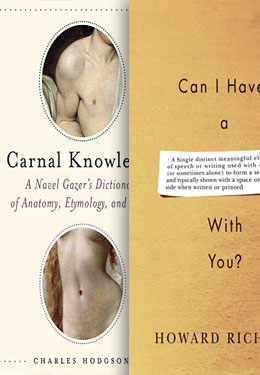 CAN I HAVE A WORD WITH YOU?
by Howard Richler
CARNAL KNOWLEDGE:
A Navel Gazer’s Dictionary of Anatomy, Etymology and Trivia
by Charles Hodgson

Though these two engaging new word books should set logophiles atwitter, their broad appeal and lack of pretension make them attractive to a far broader audience as well. 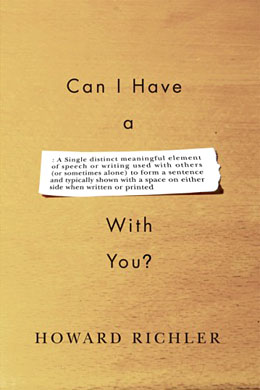 In Can I Have a Word with You?, Howard Richler, the author of several other books on language, uses his regular Montreal Gazette column as the basis for an A to Z miscellany on a variety of topics related to words. As Richler makes clear in his introduction, words are born, they live, and occasionally perish. His embracing of the inherent mutability of words makes his approach refreshingly non-prescriptive. He defends, for example, the ubiquitous modern use of the adverb “hopefully” at the beginning of a sentence – an issue that’s so often a shibboleth for orthodox language commentators. Language guardians, he notes, rarely object to the similar use of words such as “fortunately” or “sadly.” Why then is “hopefully” so often the object of their wrath?

The book explores word origins and their frequently spotty evolutions. Richler takes a particular interest in words whose mutations have made them lightning rods for the politically correct, including “abortionist,” “gay,” “fisher,” and “niggardly” – all of which are accorded their own chapters.

There are entertaining looks at phenomena that many of us are aware of but might lack the terminology for. An “aptronym” is the word for a proper name that matches its owner’s occupation or character. “Mondegreen” is the term for mishearing a phrase and replacing it with something more familiar (as when Jimi Hendrix’s famous lyric from “Purple Haze” is rendered as “’scuse me while I kiss this guy”). The chapter on malapropisms – George W. Bush being among their prime purveyors – is especially enjoyable.

Richler’s Jewish roots show in his forays into the English/Yiddish amalgam dubbed “Yinglish.” Those who have spent restless nights contemplating the nuances between a “schlemiel,” a “schlimazel,” a “nebbish,” and a “schmuck” need look no further than his enlightening chapter on the topic. 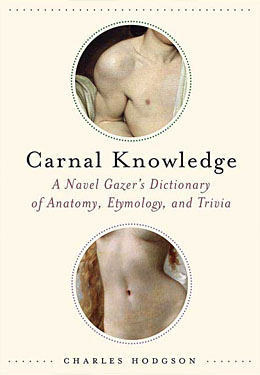 Charles Hodgson’s Carnal Knowledge is presented in a similar dictionary style, although it focuses exclusively on words pertaining to the body. Unlike your typical anatomy textbook writer, Hodgson has a wonderfully chatty way of approaching his subject matter, which inevitably ranges from the straightforward to the salacious. The section on the face offers us such delights as the “gnathion” (the lowest point of the chin) and the “mucocutaneous ridge” (the line where the lip becomes the skin of the face). And who knew the term “hooter” was originally slang for “nose” and, later on, “penis,” before its current plural incarnation?

Prurient readers, of course, will rush straight for the chapter entitled “Below the Belt,” where they will learn that the term “testicle” is rooted in the Latin word testis, or “witness.” Its current use is purportedly from the Romans, who would place a hand on their scrotum instead of a holy book to take an oath (i.e., “testify”).

A perusal of these two books might lead one to conclude that the evolution of the English language resembles a massive game of telephone, begat by Angles, Saxons, Norse, and other marauders. One might also conclude that it is the very bastardizations eschewed by the prescriptivists that make the language so rich.

Comments: Comments Off on CAN I HAVE A WORD WITH YOU?
by Howard Richler
CARNAL KNOWLEDGE:
A Navel Gazer’s Dictionary of Anatomy, Etymology and Trivia
by Charles Hodgson Posted by: admin Categories: Adult Non-fiction, Reviews Tags: language, Quill and Quire
← ORPHEUS LOST
by Janette Turner Hospital
THE GOOD LIE
by D.F. Bailey →