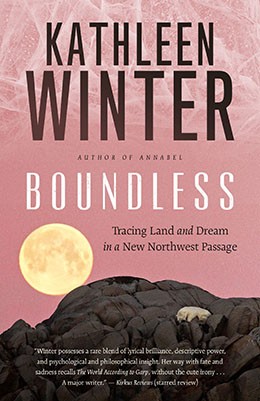 BOUNDLESS:
Tracing Land and Dream in a New Northwest Passage
by Kathleen Winter

When, in 2010, a friend asked Kathleen Winter if she’d be interested in taking a spot on an icebreaker due to travel the Northwest Passage in a matter of days, everything about the offer seemed propitious: not only had the North always held a powerful allure for the Montreal-based writer, she’d also recently taken a kind of vow of peripatetic spontaneity; her bags were literally already packed. 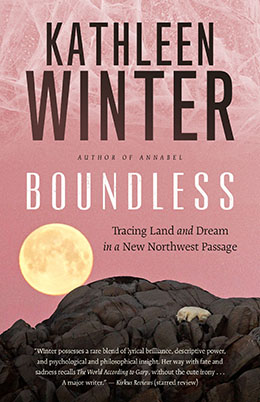 It’s hard to argue with Winter’s sense of fate. Less than a month after the publication of Boundless, her account of that voyage, came the publicity-you-can’t-buy announcement of the discovery of one of Sir John Franklin’s doomed ships. Suddenly, lines like “Franklin and his ships … accompanied us in the Arctic night, perhaps closer than many of us dared think” (p. 48) took on the aura of sly knowingness.

During the journey, Winter, a self-described introvert, often avoids socializing with the other passengers (musician Nathan Rogers, whose father Stan wrote the iconic folksong “the Northwest Passage,” and two women, one Inuk the other Greenlandic-Canadian are notable exceptions) choosing, instead, to commune with the land (a stone on the beach “called my hand to hold it” (p. 217). That she is unafraid to venture into the deep end of the earnestness pool is a quality that will lure some readers as surely as it will repel others.

Boundless evocatively captures the North’s spare, numinous beauty, its paradoxical ability to act both as blank slate and ceaseless purveyor of stories—the latter the outcome, literally, of its inhabitants’ oral traditions as well as its stubborn refusal to absorb anything; descriptions of the graves and detritus from European and indigenous presences palimpsestically strewn over the land are haunting. The North’s effect on Winter’s psyche is catalytic, leading to meandering personal digressions: on the early move from England to Newfoundland that left her feeling like “a cultural orphan” (p. 38) and the death of her first husband after a difficult marriage.

Winter is aware that the contradictions she perceives in the land exist in her too, which perhaps explains why, after taking a pass on group narwhal watching on the grounds that the creatures would reveal themselves to her “when we were both ready” (p. 122), we find her alone on deck, scanning for narwhals.

Comments: Comments Off on BOUNDLESS:
Tracing Land and Dream in a New Northwest Passage
by Kathleen Winter Posted by: admin Categories: Adult Non-fiction, Reviews Tags: Humber Literary Review, Non-fiction
← ENGLAND AND OTHER STORIES
by Graham Swift
THE RIGHT TO BE COLD
by Sheila Watt-Cloutier →