BEYOND BELIEF:
My Secret Life Inside Scientology and My Harrowing Escape
by Jenna Miscavige Hill

PR-wise, 2013 hasn’t been a great year for the Church of Scientology. In January, long-time New Yorker contributor Lawrence Wright published Going Clear: Scientology, Hollywood, and the Prison of Belief (the book’s release has been delayed in Canada pending a legal review by publisher Knopf). Now comes a sober, well-written memoir by ex-Scientologist Jenna Miscavige Hill that dovetails, damningly, with Wright’s. 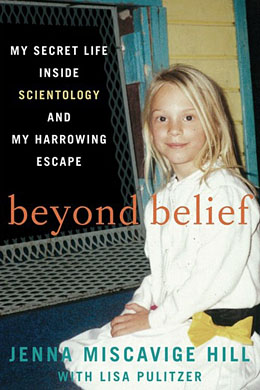 The church has accused past whistle-blowers of lacking credibility; that will be a harder sell this time. Wright won the Pulitzer Prize for his acclaimed book on Al-Qaeda, The Looming Tower, and Hill is the niece of Scientology leader David Miscavige (her co-writer is Lisa Pulitzer, a former New York Times correspondent who apparently won the name lottery).

Hill has deep roots in the church, her paternal grandfather having joined when he discovered the writings of L. Ron Hubbard—or LRH (Scientologists’ love of acronyms makes the military seem florid)—in the 60s. Her uncle David took the helm shortly after Hubbard’s death in 1986.

As members of Scientology’s highest echelon, Sea Org, Hill’s parents worked around the clock at mysterious jobs in Los Angeles and Florida. At six, Hill was sent to live on an isolated ranch outside L.A. with other Scientology children, where she was made to perform long hours of manual labour interspersed with schooling in church doctrine and made to sign a billion-year contract with the church. Access to her parents was limited or non-existent.

Scientology’s precepts are by now well-known, and though easy to mock, often resemble those of other religions. “Thetans,” the church’s term for spiritual beings, must be “cleared” of “overts,” or sins, in a process akin to Catholic confession called “auditing.” Scientologists believe in multiple lives, like some Eastern religions.

Scientology terms can be amusingly anachronistic. Leaving without permission is called “blowing the church,” while non-Scientologists are called “wogs.” When Hill was suspected of withholding overts, she had to undergo the church’s version of a polygraph test using a device consisting of two soup can-like tubes connected by a wire, called an E-Meter, that sounds rather like a prop from an early Batman episode.

Hill’s account details how the church manages to exert absolute control over its members through a combination of incessant indoctrination, limiting contact with naysayers, and a culture of paranoia in which members are given strong incentives to rat each other out for not toeing the line. Despite living in a major metropolis, Hill had virtually no contact with wogs or with technology. In contrast to the freedom of so-called public Scientologists—a group that includes celebrities like Tom Cruise and John Travolta—Hill lived an Orwellian existence in which individualism was touted while being suppressed in every possible way; that the church calls someone who speaks out against it a “suppressive person” is thus posited as the ultimate form of doublespeak.

It wasn’t until she was married and in her 20s that Hill found criticism of Scientology on the Internet that gave her pause. By then, however, she was so brainwashed that she elected to stay in Scientology even though her parents and brother had already left. Though he seemed kind when she was a child, it later became clear to Hill that “Uncle Dave” was a shadowy puppet-master who personally manipulated almost every aspect of her experience in the church leading to her departure in 2005. Many ex-members allege that the church actively seeks to divide families, and Hill says she would have left earlier were it not for the knowledge that her husband’s Scientologist family would be forced to disown them.

Courting celebrities for their public visibility has purportedly been another key church strategy. Hill and Wright’s high-profile exposés, along with the recent defection of Canadian director Paul Haggis, however, are already demonstrating what the flip side of that coin can be.

Comments: Comments Off on BEYOND BELIEF:
My Secret Life Inside Scientology and My Harrowing Escape
by Jenna Miscavige Hill Posted by: admin Categories: Adult Non-fiction, Reviews Tags: Reviews, Toronto Star
← MIDDLE MEN
by Jim Gavin
A GRAND COMPLICATION:
The Race to Build the World’s Most Legendary Watch
by Stacy Perman →